Nimrod (Dark Season 2.1) will be released on Saturday 7th July, and here’s a preview. This preview was originally going to be in the book, but I cut it for various reasons so I guess it’s exclusive to the blog! Hope you like it!

The walls shuddered. The Great Hall of Gothos was under attack, its very foundations threatened. The war was spiralling out of control and a certain victory for the Ancient Vampires seemed, now, to be slipping away. Standing at the tall, wide window overlooking the Gardens of Teeth, the Lord watched in horror as blood churned in the heavens above.

“He is coming,” said a voice from the shadows.

The Lord turned his head just a fraction, preferring not to look directly at his visitor. “I know,” he said.

“I know,” the Lord said again, this time more firmly. He held his hand up and saw that it was shaking. Impossible. He was thousands of years old, he had fought in battles that had literally shaken the Earth on its axis, yet now he was shaking… with fear? “He is only one man,” he said finally.

There was silence for a moment, and then laughter from the shadows.

“Stop,” the Lord said, still refusing to look at his visitor.

“I’m sorry,” said the voice. “It’s just… Soon, you will be a ghost, like me. And then what will you do? You will have no option but to laugh, because -”

“Silence,” the Lord commanded, but at that moment he saw something moving outside. Something marching steadily towards Gothos. Marching across the Shore of the Great Heart. Marching through the Seam of Hell itself. Marching straight towards the Lord at his window.

“Do you see him?” asked the voice from the shadows.

Suddenly the Lord felt warm breath on the back of his neck. He did not need to turn to see who it was. “I told you to stay in the shadows,” he said, keeping his gaze fixed firmly on the approaching figure.

“Oh my Lord,” whispered the voice, close into the Lord’s ear, “your power is all gone now. And the window is shattering”.

The Lord stared straight ahead and saw that it was true: the great window was slowly, slowly starting to shatter. Tiny slivers of glass were cracking and lifting away from the surface. It was as if the window was being smashed in extreme slow-motion. Slowly, a shard spun directly towards the Lord’s eye.

“Time is running out,” the voice whispered. “Any final ideas?”

The Lord paused, watching the shard moving towards him and, beyond that, the figure marching towards the house. Desperately hoping to come up with a solution, the Lord could only open his mouth helplessly. And then, with no warning, an idea did come to him. A way to defeat the enemy. He was filled with joy, but only for a moment, for it was too late. The shattering window sped up until the pieces flew so fast, they sliced the Lord into a thousand tiny pieces. And as this happened, the dark figure entered the house, marching straight through the Lord’s disintegrating body.

Nimrod (Dark Season 2.1) is out on July 7th from Amazon, and from Barnes & Noble a few weeks later.

A few short updates. First, the first Lupine Howl book will be published on Wednesday. This is the start of a new series about a werewolf, set in the same universe as Dark Season but featuring completely new characters and stories. I’ll post more about Lupine Howl when it’s up on Amazon.

Meanwhile, with the first series of Dark Season books now finished following the publication of Dead End, I was planning on forgetting about Patrick and Sophie for a few weeks before I start on the second series. But they just keep forcing themselves into my thoughts, so I have not one but two new book covers ready to reveal. The first is for Dark Season: 20th Century Vampire, which will be published in April and will be a double-length book covering the 100 years before the start of Dark Season: The Last Vampire. 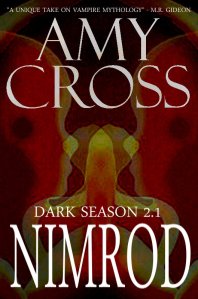 Then, in July, Dark Season series 2 starts with the publication of Nimrod. I was originally going to call the first book Abigail, but some of the plans changed and Nimrod is the curtain-raiser. It resolves the cliffhanger ending from Dead End and starts answering some of the new questions. If you’re wondering what ‘Nimrod’ means, it’s a name but it’s not the name of Patrick and Sophie’s child. Nimrod will signal the start of a big change in the books, and he’ll be about for a while.

I’ll post more about both these books closer to the time. For now, I’m focusing on Lupine Howl and some other projects. But Dark Season is still there in the background, bubbling away…