Sins of the Father (Ghosts II) 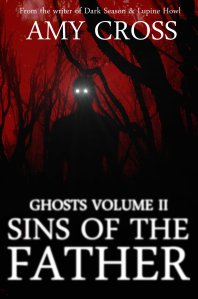 Beth Keneally is out for revenge. Her father hacked her to death with an axe and now seems determined to kill her little sister as well. For Beth, this means only one thing. She has to learn how to manifest as a physical presence and make sure her father pays for what he did to her.

Meanwhile there’s a mysterious figure lurking on the edge of town, a mythical ‘Red Man’ who strikes fear into the heart of the entire town. As Beth and Kal investigate this ‘Red Man’, they discover that all the dark secrets they uncover lead back to one man: Lucas Everard.

Ghosts continues with Beth determined to get revenge on her father. But with Lucas Everard mysteriously involved, it quickly becomes clear that Beth faces a struggle if she’s to find a way to punish the man who murdered her.

Meanwhile, Kal investigates the myth of the ‘Red Man’, who haunts the outskirts of town. How is this strange creature connected to Laura, who many years ago lost her son after a car crash? Kal soon discovers that he’ll need Beth’s help if he’s to uncover the truth.

Available from Amazon (US) and Amazon (UK) for the Kindle. Word count: approximately 20,000 words. Part of a series.