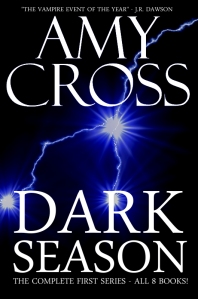 For the first time, the entire first series of Dark Season books is available in one volume. Total word count is over 180,000 words, approximately 700 to 800 pages of a printed book.

When Sophie Hart is rescued from a mugging by a mysterious, silent vampire, she discovers that she is part of a dark prophecy. Patrick is the last vampire on Earth, having killed the rest of his species at the end of a bloody war, and he has plans for Sophie. But will she survive?

This volume collects the first 8 Dark Season books, covering the entire first series. Along the way, Sophie encounters not only a vampire but also werewolves, ghosts, evil maids with sharp teeth, crazed psychiatrists and dream-sucking Tenderlings. She travels to Gothos, the ancestral home of the vampires. She discovers a secret hidden inside the body of an old woman, and later she finds another dark secret hidden inside her own body.

You can now buy the entire first series of Dark Season books together in one book at the special discounted price of $6.49. This volume contains all 8 books (The Last Vampire, Sentinel, Army of Wolves, The Civil Dead, The Life Death Life Life and Death of Martin Keller, Gothos, Testament and Dead End) PLUS as a bonus it also contains the first volume of Lupine Howl. That’s a total of more than 180,000 words.

The series follows Sophie Hart as she explores the world of Patrick, a silent vampire who is the only survivor of the devastating vampire war. It was Patrick himself who end that war, destroying the rest of his species in the process, and he is now haunted by the guilt – and the ghosts – of what he did. As Sophie discovers more about Patrick, she encounters various other creatures including werewolves, Tenderlings, ghosts and more, before she finally discovers Patrick’s dark secret, and the real reason why he is interested in her.

Available from Amazon (US) and Amazon (UK). Word count: approximately 180,000 words. Part of a series.