The original Dead Souls parts 1 to 52 are now free on Wattpad!

The original 52 parts of Dead Souls are now available for free at Wattpad. You can find them at this link, where you’ll find a table of contents that allows you to access each of the parts. New parts will also start appearing for free at Wattpad soon, hopefully by the end of February!

When I launched Dead Souls, I wanted to write a vampire soap opera. I thought Amazon would be the best way to get the series out, but I realized after a while that the constant 99 cents price tag was quite off-putting. By that point, I’d already signed an agreement for the first 52 parts, but now I’m in total control of the series so I’m releasing it all for free.

In my head, I’ve basically ‘renewed’ Dead Souls for a second year, which means another 52 parts. I have the story mapped out, and I know the main plots points for the characters, including who lives and who dies. The series will continue to be written and released in 13-part bursts, because I find that an easier way to write them. I don’t want to give away too many spoilers, but there are plane crashes, family reunions and terrible downfalls ahead in the next few parts!

Just a quick note for anyone who’s wondering about the Dead Souls series. There will be new releases soon, I’m just waiting to sort out some issues with the original 52 books. Also, I’m changing the way they’re released, so it’ll be much cheaper to keep up with the series. I anticipate having everything fixed by the middle ofFebruary, at which point I should be able to release the further adventures of Edgar, Kate and all the other residents of Thaxos! 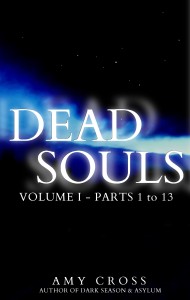 The first two collected volumes of Dead Souls are now available from Amazon!

Because of the huge size of the Dead Souls serial, I’m dividing it up into 13-part chunks. There are two reasons for this: first, because that’s how I plot out the story, and second, because if the collected volumes were any larger, I wouldn’t be able to put out paperback versions. As it is, they’re coming in at around 800 pages each, which is just shy of the maximum page-count offered by Createspace. 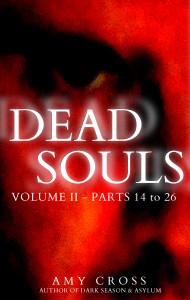 Dead Souls is designed as a kind of ongoing paranormal romance / horror serial. I currently have the first 65 parts mapped out, but I hope to keep it going longer than that. I know that a lot of readers are wary of authors who cut up books into smaller chunks to make money, but I want to make it clear that that’s not what I’m doing with Dead Souls at all. This is an ongoing serial, with real cliffhangers each week, and I’m writing it because I grew up loving TV soap operas like Eastenders, Coronation Street, Neighbours and (from the USA) Days of Our Lives.

Yes, I know it’s a bit odd for a Brit to like Days of Our Lives, but it’s true! I’ve always had a soft spot for E.J. and Sami, as well as the version of Shawn who was in it up until around 2005 / 2006. So yeah, I could go on and on, but I love ongoing stories and I’ve always wanted to write one. I’d been planning Dead Souls for a while, and then when Kindle Unlimited launched with its unlimited subscription offer, I realized the time was right!

Just a quick update to say that Graver Girl (Grave Girl 2) is coming very soon, almost certainly within the next week. The delay has been due to two things. First, a need to change the ending, which now sets up the third book in the series; and second, some changes to Dead Souls as that serial moves past its original thirteen-part run.

After part 13 of Dead Souls, there will be a short break, just a week or two. This is partly to exploit the big cliffhanger, and partly to facilitate a small change to the way future installments are released. Starting with part 14, there will be pre-orders, which means each new part will be available to pre-order at least a week before its actual release date. Dead Souls has always been a bit of an experiment, so little things are changing all the time.

There’ll also be a Dead Souls omnibus at the end of October, containing parts 1 to 13. I’m putting the file together now, and it’s coming out at roughly 900 pages. I have to cut some of the back-matter, though, because 900 is slightly above the maximum limit allowed by Createspace for the paperback edition. Speaking of which, paperbacks of Asylum and other books are still in the pipeline, I hope to have more news soon! 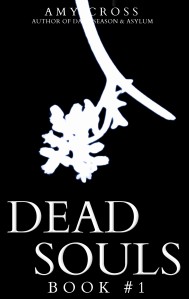 Starting today, the first three parts of Dead Souls are available from Amazon. Dead Souls is a new ongoing horror / paranormal serial set on a remote island, focusing on the return of the mysterious Edgar Le Compte and his impact on the local inhabitants.

Dead Souls isn’t a novel cut up into smaller chunks. It’s plotted and written as a serial, so each part has a cliffhanger and it’s designed to be read as a weekly series of 20,000-word novellas. A new part will be released every Monday, and the usual price will be 99 cents. Each part will get a few free days shortly after release. And they’ll also all be part of Kindle Unlimited.

There will be a total of 26 parts, so by the time it’s finished, Dead Souls
will run to around 2,000 pages and half a million words. There’ll be an omnibus edition at some point when it’s finished. 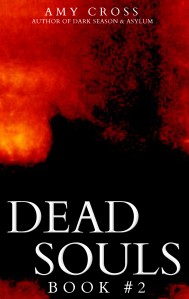 I figure this is the perfect time to try this kind of serial fiction, which I’ve been thinking about for a while. When I was a teenager, I even hand-wrote story ideas for a (non-horror) soap opera I came up with, and I ended up with twenty years’ worth of episodes planned out. The notes filled six big ring-binders. I wish I still had them, but one day I threw them out! Um, yes, I guess that sounds a bit weird, but at least I had a hobby!

So this is like the way that Dark Season was originally released, except that this time it’s a much longer project! I’ve got the whole series mapped out, although reader feedback could affect some of the plot elements if people feel strongly about anything. The main story, however, is about Edgar and Kate’s relationship, and I know exactly how that develops and where they’ll be (or not be!) when the whole serial ends.