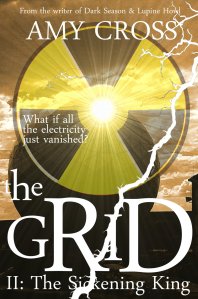 The Sickening King (The Grid II) is finally available at Amazon. The first book in the series came out more than three months ago, so it’s fair to say that I took my time with this one. The Sickening King sees Emma trapped at a nuclear facility as a deadly parasite makes its presence felt. The book gives an indication of how the series is going to progress. The next instalment of The Grid will be Stories From The Grid (The Grid III) in July, followed by Medusa (The Grid IV) and The Shattered Hand (The Grid V). There’ll then be three more books to round out the series.

Meanwhile, Nimrod (Dark Season 2.1) is next, and will be available from July 7th. I’ll be releasing one Dark Season book per week for eight weeks in series two. The titles and dates are:

After series two has finished, there’ll be another break and then, before the end of the year, the third and final series will be released. The thought of ending Patrick and Sophie’s story permanently is kind of scary, but fortunately I’ve known all along exactly how it finishes. Let’s just say there’s a very definite resolution and after book 3.1 you’ll see how the story is over. But that’s a long way off yet. Hope you all like series two when it arrives…

This entry was posted in Dark Season, The Grid and tagged The Sickening King. Bookmark the permalink.